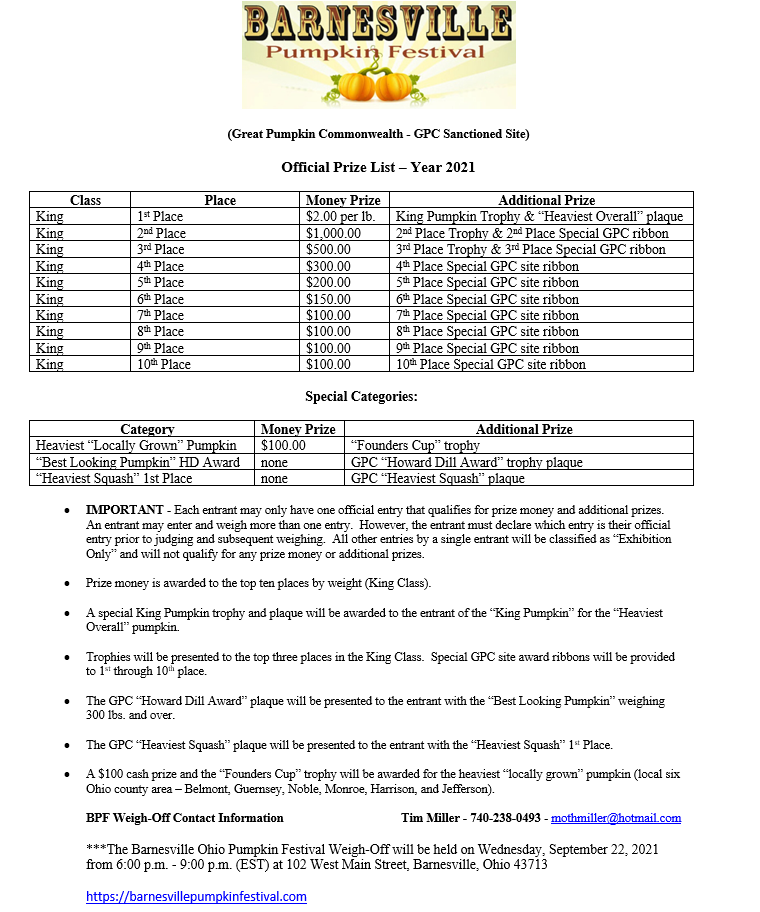 IMPORTANT – All entries will remain in Barnesville, Ohio for display until 4:00 p.m. on Sunday, September 26th, 2021.

1. The competition is open to all persons with no entry fee required.

4. IMPORTANT – Each entrant may only have one official entry that qualifies for prize money and additional prizes. An entrant may enter and weigh more than one entry. However, the entrant must declare which entry is their official entry prior to judging and subsequent weighing. All other entries by a single entrant will be classified as “Exhibition Only” and will not qualify for any prize money or additional prizes.

6. The exhibit winning in the King class will become the property of the Barnesville Pumpkin Festival Committee. No exceptions to this rule will be made. 50% of the seeds extracted from the “King Pumpkin” will be provided back to the winning grower. The BPF Committee will retain and use the other 50% of the seeds for fund raising for next year’s event.

7. All exhibits other than the “King Pumpkin” may be claimed by the owner on Sunday, September 26th at 4:00 p.m. Any unclaimed exhibits will be auctioned off at 5:00 p.m. or will be harvested for seeds with the proceeds going to the Barnesville Pumpkin Festival Committee to be used as prize money for next year’s weigh-off.

8. All specimens that will be submitted to the GPC for prize money and recognition will be weighed on our certified scale with only the fruit on the scale. Weights will be recorded in 1 or ½ pound increments (rounded down to the nearest ½ pound). All participants are expected to watch and oversee the weighing of their entries. Once the pumpkin or squash has been weighed and removed from the certified scale, the entry is official and will not be reweighed unless specifically requested by the judges.

9. No foreign material (i.e.: fungicides, caulking, skin additives, etc.) will be permitted in the weighing of any fruit. Vines must be trimmed to within one inch of the stem of the fruit. The stem itself will not be applicable to judging as stated below. The judges reserve the right to x-ray the entry.

12. All decisions of the judges are final.