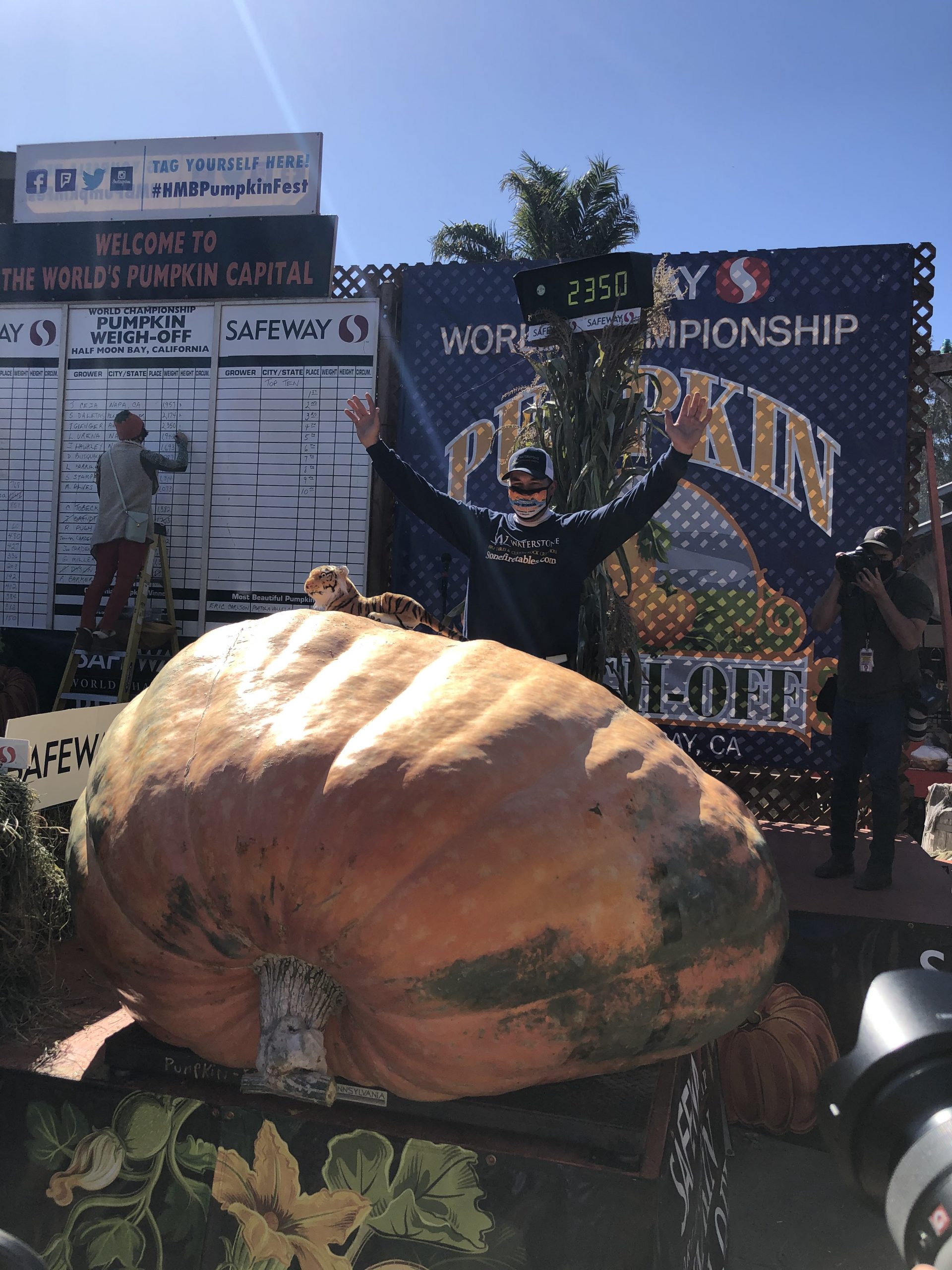 The excitement is building in Pumpkintown as Half Moon Bay’s 48th Safeway World Championship Pumpkin Weigh-Off returns Monday, October 11 and this year organizers, in association with Safeway, are upping the ante big time to celebrate the world’s greatest gourd growers and hopeful revival of live events.

The world’s biggest top prize has been increased to $9/pound (from $7/pound) for the 2021 weigh-off champion plus there’s the standing $30k total prize package for a new world record as the World’s Greatest Gourd Growers and their mind-blowing, Volkswagen-sized orange orbs hope to squash the record at the “Super Bowl of Weigh-Offs” — in the World Pumpkin Capital of Half Moon Bay, California.

Weigh-off organizers and title sponsor Safeway are offering a world’s biggest top prize of $9 per pound. Also at stake are thousands of dollars in super hefty prize money doled out to the top 20 plus the big carrot: a $30,000 total mega-prize for a new world record pumpkin entered at Half Moon Bay — considered the “Super Bowl of Weigh-Offs”. The weighing of monster pumpkins will begin at 7am and end around 11am.

Organizers hope to bring the weigh-off back to the established IDES Grounds location on Main Street this year but in the end the event site will be dictated by mandated guidelines and the hopeful easing of restrictions in the months ahead.

Last year’s weigh-off site, Long Branch Farms, will be the alternate location if a private, limited capacity location is required.

With competitive growers in their springtime tradition of preparing soil, planting seed and tending to patches, weigh-off officials want growers and the public to have a clear understanding of their intentions and plans going forward.

WORLD RECORD PRIZE:
The Safeway World Championship Pumpkin Weigh-Off is offering $30,000 in total prize money for a new world record set at the prestigious Half Moon Bay event. To receive the $30,000 mega-prize, the grower must break and hold the world record at the conclusion of the Half Moon Bay weigh-off. If two or more growers happen to break the world record at Half Moon Bay, the prize money would go to the grower of the heaviest pumpkin. The current world record is 2,624.6-pounds set in 2016 at a weigh-off in Germany. Here’s how the $30,000 breaks down: the winner receives a world’s biggest $9 per pound plus plus the difference to get to a total of $30,000.

OFFICIAL RULES:
• This event is open to growers of giant competition-sized pumpkins only.
• Pumpkins must be grown, cared for, and entered by the weigh-off contestant.
• Each contestant is limited to one entry.
• Pumpkins that have won prizes in any other weigh-off competitions are not eligible.
• In the event of a tie, prize money will be distributed equally among the tied parties.
• Decisions of the judges are final in all cases.
•Pumpkins must be in healthy and undamaged condition, free of rot, holes and cracks through the cavity, chemical residue, and soft spots.
•To be classified as pumpkin, specimen must be 75% yellow/orange in color; all others will be classified as squash.
•The vine must be trimmed to one inch from the stem. No foreign material is permitted in the weighing.
•All pumpkins will be weighed without the use of tarps or other carrying devices.
•Pumpkins will be classified by division based on where the specimen is grown, not the residence of the grower.
•The weigh-off will be conducted in accordance with GPC rules.

DELIVERY OF ENTRIES:
Growers are responsible for bringing their entries to the weigh-off by 7:00 a.m. Weigh-off staff will move pumpkins using brute strength manpower, special harnesses and forklifts. ALL entries will be handled with care.

WEIGHING:
The weighing and inspection will be officiated by the GPC and San Mateo County Department of Agriculture Office of Weights and Measures. The official weighing will be conducted using a 5-ton capacity digital scale.

GROWERS AWARDS LUNCHEON:
There will be an awards luncheon to honor all contestants immediately following the weigh-off.